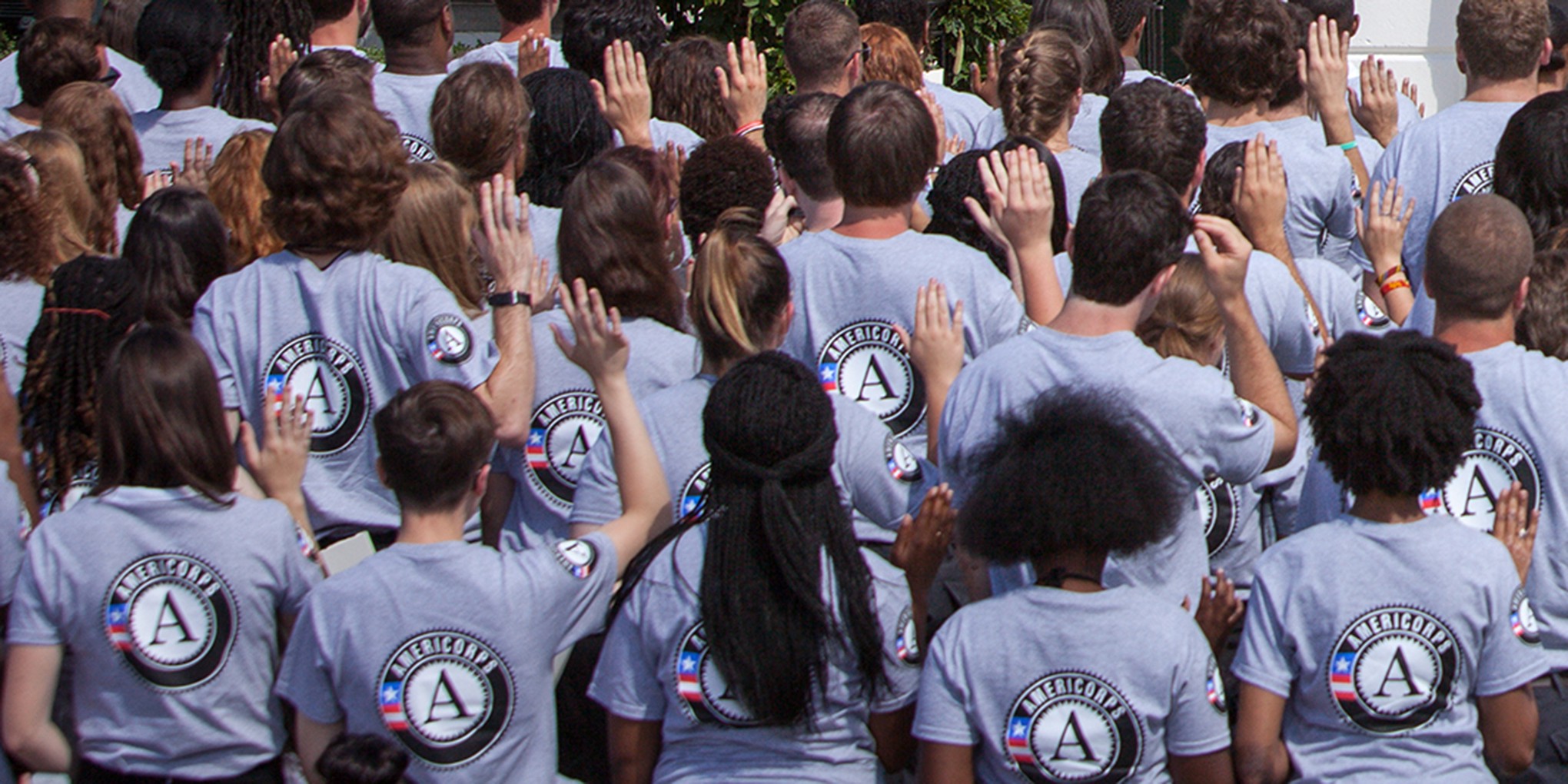 This page provides a summary of the Science Court case tried in Spring 2021. It includes the case statement, details on the student teams that prepared, reported and tried the case, and the jury that made the decision. Links are provided to recordings and slides of all information presented at the trial on April 24, 2021 and the verdict announcement on April 27, 2021 (following the jury's deliberation on April 25):

For additional information on this case with weekly updates and detailed reporting on the trial, visit the blog page.

You can watch the entire trial and verdict on YouTube, or click on the individual segments linked to on this page.

For information on how to cite this Science Court case, click here.

The Science Court Case Statement is made up of two parts: a problem that needs to be addressed, and a proposed solution. The SciCourt case for Spring 2021:

To fight polarization in American society, a mandatory national service should be adopted.

The pros and cons of the case are argued by students in the legal team based on reliable scientific evidence (soft and hard science) collected by the science team students. The pro and con legal teams are each responsible for proposing complete solutions for addressing the posited problem, one that is more on the pro side (the "pro-ish" proposal), and one that is more on the con side (the "con-ish" proposal). This approach is designed to ensure that the pro and con legal teams consider the posited problem comprehensively, and not simply attempt to poke holes in each others' arguments. The pro-ish and con-ish proposals are presented to the jury as two competing worldviews.

The facts were researched by the students on the Science Team (shown below) each focused on a specific domain indicated in parentheses. From left to right: David Ashley (sociology and political science), Philip Dowdell (health), Jennie Lim (education), Manix White (psychology), Minnerva Zou (economics).

The arguments pro and con the case were made by the students on the Legal Team (shown below from left to right): Andrew Bremner (pro), Nishant Satpathy (con), Madeleine Stankiewic (con), Arunn Suntharalingam (pro).

The trial began with an introduction by Prof. Ellad Tadmor explaining the process and providing background to the polarization and national service underlying the pro and con cases. You can watch the introduction here:

The pro and con teams set the stage with opening statements describing their philosophies and pointing to weaknesses in the opposing teams arguments. At the end, some jury questions were answered. Watch the video and review the presentation slides:

The Science Team members reviewed 95 journal articles (some of which were systematic reviews or meta-analyses that themselves reviewed multiple studies). Evidence was collected in six domains (education, economics, health, poltiical science, psychology, sociology).

The evidence was accepted by the pro and con legal teams who agreed to argue from a common set of facts. A complete list of the reviewed articles along with reasons for their inclusion is available in the Master Source List.

The evidence was presented in a series of sessions during the trial, which consisted of a short presentation by a science team student followed by questioning by the legal pro and con teams, jury questions, and then summary statements by the legal pro and con teams. Recordings of these sessions along with the science team presentation slides are given below in the order presented at the trial.

Summary: The polarization of American society results in significant financial losses for the U.S. economy.

Summary: The polarization of American society adversely affects the health and wellbeing of Americans.

Session 03 – Sociology 1: "American identity" and its Relationship to Polarization

Summary: Reminding individuals of their broader (or “superordinate”) identities can reduce polarization and sensitize people to discrimination.

Summary: Political polarization has a strong negative effect on people’s lives outside of politics.

Summary: Participation in service programs has long-term outcomes including an effect on future volunteerism and learned skills.

Summary: American society has traditionally valued individual freedom over state-directed programs except in times of crisis.

Summary: Service programs have benefits both individually for participants and on the national level to the country.

Summary: A key factor assessing the viability of service programs is their cost after accounting for any returns on investment.

After all evidence was presented, science team members provided clarifications to questions they were asked during the session for which they did not have complete answers at the time. (They looked up the answers while other sessions continued.)

The pro and con legal teams conclude their arguments with closing statements that reiterate their main ideas tying into the presented evidence. Watch the video and review the presentation slides here:

The trial concluded with a discussion where jury and audience members asked questions of the pro and con team legal teams mediated by Judge Bill McGinnis.

The jury deliberated the evidence on Sunday, April 25, 2021 for three hours. To facilitate debate, the full jury was divided into three panels that deliberated and reached verdicts independently. The final verdict was decided based on the majority of the panel verdicts.

The jury panels were given a Special Verdict Form where they were asked to answer a question for each session to help them determine whether the pro or con team prevailed on that particular issue. They were then asked to determine "by the greater weight of the evidence" whether the pro or con program should be adopted to fight polarization. The jury panels were asked to strive for a unanimous verdict. They were given the opportunity to present a "third way" if they had a suggestion different from the pro and con positions (but none of the panels did so).

And the verdict is...

The jury panel decisions were:

Based on these votes,

the final decision of the 2021 Science Court Trial is in favor of Mandatory national service as argued by the PRO team by a vote of 2 panels to 1.

You can watch the verdict announcement event including, a brief review of the case, and the decisions read by the jury forepersons here:

The verdict announcement was followed by a public discussion with the jury, audience, students and staff:

The complete jury statements are provided here for the record.

Decision: Mandatory national service as argued by the PRO team

Explanation: Based on the evidence presented and the narrow scope of the question in addressing political polarization in particular, the jury concluded that mandatory national service would be more effective in achieving these goals. This is because pro proposal engages more of the population and had a more complete vision of how their program would use American/superordinate identity to reduce polarization. However, we want to note that the jury could not endorse the idea as a whole, due to several other considerations and unanswered questions, including on ethical and operational issues.

Decision: Mandatory national service as argued by the PRO team

Explanation: For the Con side: There a lot of concerns on the ethics of the Pro side that were not covered. How would the Pro side deal with/mitigate the effects of discrimination for those in the program and those they are serving? How will equity be ensured and carried out (how safe will participants be? How can equal participation from all socioeconomic backgrounds be carried out)? Is there consideration for the immediate political push back if this were to pass? What locations and experiences are we applying these programs to? Will systems be in place to vet the safety and efficacy of where send our participants? This needs to be strictly civilian not military based. On the Pro side: From a macro perspective, from a black/white unnuanced view, a mandatory program does a better job drawing a larger pool of different views/extreme views and people from different backgrounds to a common table for establishing common compromises, morals and goals. Having a mandatory program strikes similarities to the Draft of WWII for Army service and how the draft affected and drew from the population regardless of backgrounds and beliefs. The Volunteer army has become people who feel forced to serve for economic benefits and allow people of higher socioeconomic status to opt out. There is a chasm/deficit of Trust to bridge in establishing such a program and the Mandatory program is definitely on the line of overstepping the bounds to a too top heavy approach/almost authoritarian style program that risks centralizing power over peoples' lives if not structured and maintained with enough democratic participation. There is a good possibility for more opportunities for personal and national pride amongst the people and their work towards making the country a better place for now and the future. Having a common goal (trees, infrastructure, national parks, etc.) can help to reestablish a positive trust and identity on a federal level as well as state and local communities. Neither of these 2 programs are perfect, but the PRO team has made a stronger case in proposing the value of their potential programs/ideas.

Decision: Voluntary national service as argued by the CON team

Explanation: The final vote went in favor of the CON side as we felt there was a lack of very strong scientific evidence for both sides but overall the CON side seemed to present a stronger case with evidence to back it up. Additionally, concerns about the negative outcomes of forcing people to participate in a program such as this, such as an unwillingness to truly participate and change. However, the three PRO votes would like to note that they believed that, theoretically, a mandatory service program should reduce polarization the most due to contact theory.

To cite this Science Court case:

Science Court. (2021). “To fight polarization in American society, a mandatory national service should be adopted." University of Minnesota. Retrieved from https://scicourt.umn.edu/2021-mandatory-service